Romancing the Duke: Castles Ever After (Mass Market) 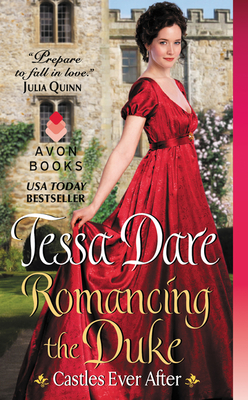 Romancing the Duke: Castles Ever After (Mass Market)

This is book number 1 in the Castles Ever After series.

As the daughter of a famed author, Isolde Ophelia Goodnight grew up on tales of brave knights and fair maidens.  She never doubted romance would be in her future, too.  The storybooks offered endless possibilities.

And as she grew older, Izzy crossed them off.  One by one by one.

Now Izzy’s given up yearning for romance. She’ll settle for a roof over her head.  What fairy tales are left over for an impoverished twenty-six year-old woman who’s never even been kissed?

Tessa Dare is the New York Times bestselling, award-winning author of more than a dozen historical romances. A librarian by training and a book-lover at heart, Tessa makes her home in Southern California, where she shares a cozy, cluttered bungalow with her husband, their two children, and a pair of cosmic kittens.

Dare starts her new series with a unique storyline, a sweet, fun nod to literary fandom, and two main characters who are perfect for each other yet never would have met if they weren’t each at a nadir in life’s journey. — Kirkus Reviews (starred review)

I think this is a truly unique historical that will appeal to readers who aren’t often historical fans. — Smart Bitches Trashy Books

This book is already in my top books for 2014. This new series of Tessa Dare’s is off to an amazing start! — Smexy Books

Splendidly talented Dare creates cleverly written dialogue, exceptionally appealing characters, and an engaging plot that gives a wink toward Beauty and the Beast and a nod to fandom, all key components in this wickedly funny and soul-satisfyingly romantic novel, the perfect launch to Dare’s new Castles Ever After series. — Booklist (starred review)

Tessa Dare’s first instalment in the new Castles Ever After series, ROMANCING THE DUKE will have readers clearing their keeper shelf just to make room for this little gem! Jam- packed with hilarious banter, Dare’s trademark humor is showcased in its full glory. — Fresh Fiction