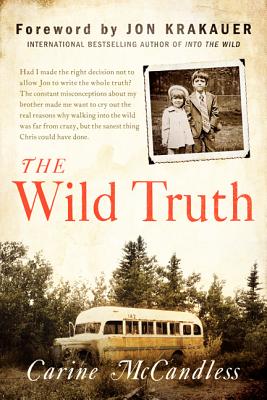 “As sad as Jon Krakauer's Into the Wild was, the truth behind Chris McCandless's decision to divorce his parents after graduating from college is even more heartbreaking. Carine, his sister, does an admirable job telling the story of their shared, difficult childhood -- rich in material goods, but poor in parental love and support. In public, their parents were wealthy and admired pillars of the community; in private, they abused their children both physically and emotionally. The truths Carine shares do much to redeem her brother's memory and to demonstrate how strong they both were in the face of adversity.”
— Susan M. Taylor, Market Block Books, Troy, NY

It's been over 20 years since Jon Krakauer wrote Into the Wild about Chris McCandless' journey into the Alaskan wilderness.  There are still so many unanswered questions about Chris' rationale for escaping into the land that eventually takes his life.  After years of silence, Chris' sister Carine tells her side of the story and what a crazy story she shares!  The McCandless parents take dysfunctional to a whole new level.  Although this is Carine's story, she definitely sheds some insight on the abusive childhood she and Chris endured.

NEW YORK TIMES BESTSELLER – The true story behind Jon Krakauer’s bestselling novel and Sean Penn’s acclaimed film Into the Wild, from the sister of Chris McCandless, filling in questions about Chris’ journey of self-discovery and the dysfunctional childhood that pushed him to brave the Alaskan wilderness alone

"The Wild Truth is an important book on two fronts: It sets the record straight about a story that has touched thousands of readers, and it opens up a conversation about hideous domestic violence hidden behind a mask of prosperity and propriety."–NPR.org

The spellbinding story of Chris McCandless, who gave away his savings, hitchhiked to Alaska, walked into the wilderness alone, and starved to death in 1992, fascinated not just New York Times bestselling author Jon Krakauer, but also the rest of the nation. Krakauer's book,Into the Wild, became an international bestseller, translated into thirty-one languages, and Sean Penn's inspirational film by the same name further skyrocketed Chris McCandless to global fame. But the real story of Chris’s life and his journey has not yet been told - until now. The missing pieces are finally revealed in The Wild Truth, written by Carine McCandless, Chris's beloved and trusted sister.  Featured in both the book and film, Carine has wrestled for more than twenty years with the legacy of her brother's journey to self-discovery, and now tells her own story while filling in the blanks of his. Carine was Chris's best friend, the person with whom he had the closest bond, and who witnessed firsthand the dysfunctional and violent family dynamic that made Chris willing to embrace the harsh wilderness of Alaska. Growing up in the same troubled household, Carine speaks candidly about the deeper reality of life in the McCandless family. In the many years since the tragedy of Chris's death, Carine has searched for some kind of redemption. In this touching and deeply personal memoir, she reveals how she has learned that real redemption can only come from speaking the truth.

Carine McCandless is an entrepreneur, activist, and mother. She has been successfully self-employed since she started her first business at the age of nineteen. As a public speaker her presentations are featured in education and corporate venues across the United States. She is the sister of literary icon Chris McCandless and consulted closely with Jon Krakauer on his bestselling book Into the Wild. She also worked as a direct advisor and script contributor to Sean Penn for his film adaptation of the book. She lives in Virginia Beach, Virginia with her two daughters.

“One of the driving points of The Wild Truth is that [McCandless’s] famous, ultimately fatal journey of adventure and discovery was motivated in large part by a desire to escape his parents…Carine’s new book fleshes out the causes of Chris’s actions with much more detail and impact.” — Outsideonline.com

“The Wild Truth is a moving narrative of domestic abuse, grief and survival, and for the perspective and revelations it contains, an essential additon to the Into the Wild story.” — Newsweek

“Fiercely honest and gripping. . . . She honestly shares her successes and failures in work and relationships as she comes to the realization that she has tried to find in adult life what was lacking in her childhood: worth, strength, and unconditional love.” — Publishers Weekly

“The Wild Truth is an important book on two fronts: It sets the record straight about a story that has touched thousands of readers, and it opens up a conversation about hideous domestic violence hidden behind a mask of prosperity and propriety.” — NPR.org

“Helping her readers become more familiar with the overwhelming burdens caused by dysfunctional parents is one of The Wild Truth’s major achievements. [McCandless] touches each of us…[we] have a better sense of what drove her brother and compelled her to write about her own harrowing history.” — Anchorage Press

“A powerful book…For me, reading it was like finding a crucial missing word in the middle of a crossword puzzle: once those letters were filled in, the answers to the blank spaces around them also cascaded into place.” — Eva Holland, Vela Magazine