Cowboy, It's Cold Outside: A Twilight, Texas Novel (Mass Market) 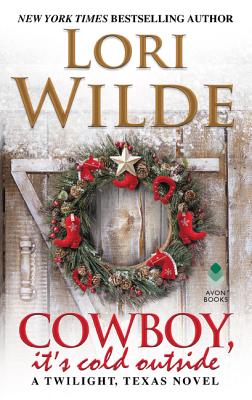 Cowboy, It's Cold Outside: A Twilight, Texas Novel (Mass Market)

This is book number 8 in the Twilight, Texas series.

It is indeed cold outside and the heroine could let the cowboy warm himself at "...the nuclear reactor in her pants..." BUT, will she? Because naturally they hate each other at first. Besides, she's seen his type before and, "...he ain't the marryin' kind." But, it is cold outside. So, read the book and see if the cowboy's damnable pride causes him to freeze to death out on the frozen range of if he eventually warms his tootsies at that radioactive fire he started.

Everyone in town knows that Christmas in Twilight has a way of bringing lovers together . . . but will its magic bring this pair from “I won’t” to “I do”?

Wearing a too-tight “Santa Baby” costume held in by a double pair of Spanx, Paige MacGregor runs headlong into a gorgeous, grey-eyed hunk of a long, tall cowboy. And not just any cowboy, but country-western star Cash Colton, visiting Twilight to perform in a charity concert. Most women would melt at his feet, but Paige knows all too much about self-assured men with cocky attitudes, so she tells him to get lost.

Cash is in town, nursing his own broken heart, but Paige has knocked him off his feet. He’s convinced she’s perfect—someone to inspire his music and share his now-empty bed. True, he’s not marriage material, but he’s determined to convince her that they’re perfect together—at least for a while. But what he doesn’t count on is falling in love with the one woman who isn’t about to give him the time of day!

“…A a superbly executed contemporary romance. From the book’s richly nuanced characters to its heartwarming small-town setting, each element plays off the others in perfect harmony. And when it comes to striking exactly the right balance between sweet and sexy, Wilde has the equivalent of perfect pitch.” — Booklist