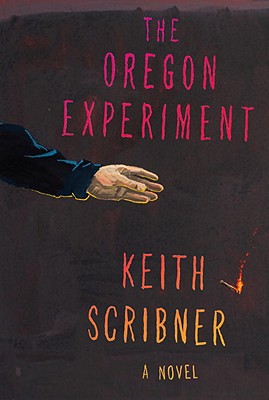 Keith Scribner's latest novel, The Oregon Experiment, is an olfactory adventure from coast to coast.  Young Professor Scanlon Pratt and his wife Naomi relocate to a small, coastal Oregon town from New York City.  Pregnant and temporarily without her infamous sense of smell, Naomi struggles with her inability to continue working as a fragrance designer.  Unhappy, she finds solace in young anarchist Clay as Scanlon looks to his new, enchanting friend Sequoia for compassion.  Many adventures pursue and lead to the novel's unconventional ending.

East Coast transplants to small-town Oregon, Naomi and Scanlon Pratt are at the threshold of a new life. Scanlon has a position at the local university—teaching mass movements and domestic radicalism—and Naomi, a fragrance designer whose sense of smell has inexplicably vanished, is pregnant with their first child.

For Scanlon, all of this is ideal, from impending fatherhood to the chance for professional vindication. The Pacific Northwest provides ample opportunities for field research, and almost immediately he finds a subject in Clay, a troubled young anarchist who despises Scanlon’s self-serving attempts at friendship but adores Naomi. He also becomes involved with a regional secessionist group and—despite his better judgment—with its leader, a sensuous free spirit called Sequoia.

Naomi, while far less enchanted with these radically different surroundings, discovers that Oregon has something to offer her as well: an extraordinary world of scents. Her acutely sensitive nose is somehow revived, though she certainly doesn’t like everything she’s smelling. And as the Pratts welcome their newborn son, their lives become so deeply entwined with Clay’s that they must soon decide exactly where their loyalties lie, before the increasingly volatile activism that Scanlon has been dabbling in engulfs them all.

A contemporary civil war between desire and betrayal, rich in crisp, luxuriant detail, The Oregon Experiment explores a minefield of convictions and complications at once political, social, and intimately personal.

Keith Scribner is the author of two previous novels, "Miracle Girl" and "The GoodLife, " a "New York Times" Notable Book and a Barnes & Noble Discover Great New Writers selection. He is a recipient of Stanford University's Wallace Stegner and John L'Heureux fellowships, and is currently a professor at Oregon State University in Corvallis, where he lives with his wife, the poet Jennifer Richter, and their children.

“The Oregon Experiment has many virtues—Scribner has a sharp eye for the complicated grace and endless capacity for self-delusion among our species, he makes the potential cultural and economic independence of Cascadia worth pondering rather than snickering at, and the attention to scent and smell add a lovely subtle layer of narrative; ‘his scalp and skin were in the dusty family,’ Naomi thinks of her husband, ‘canvas stored in the basement, pages of a book pulled from a garage-sale box, a stranger’s wool sweater.’”
--San Francisco Chronicle

“The Oregon Experiment captures the sheer physicality of new parenthood as well as its emotional tyranny in our age of awareness better than anything I’ve read, fiction or nonfiction … In many ways, The Oregon Experiment belongs in the same class of modern social realism as Jonathan Franzen’s The Corrections and Freedom. It is a hugely ambitious, decidedly modern, distinctly American novel, with complicated family dynamics, and remarkable depth of character and psychological nuance.”
--The Rumpus

“…the experiment [is] one of making a new life among Oregon’s latter-day hippies and anarchists, learning to be parents, and discovering the rebellious spirit in themselves and the local population. Scribner’s The GoodLife made quite a splash, and The Oregon Experiment is no less ambitious, with rich characters and some amusing plot twists.”
--Booklist

“Though set in Oregon, the themes and sensuality of The Oregon Experiment are universal, and readers anywhere will relate to the deep characters and lush description of setting and culture. I don’t say this lightly: I’ll be reading this book again within the year”
--Jennifer Tyler, “Three Guys One Book”

“Each character struggles with the line between idealism and realism, and, to his great credit, Scribner (Miracle Girl) avoids making the reader feel lectured as he plays out his exploration of what happens when ideas and desires get put into practice.”
--Publishers Weekly