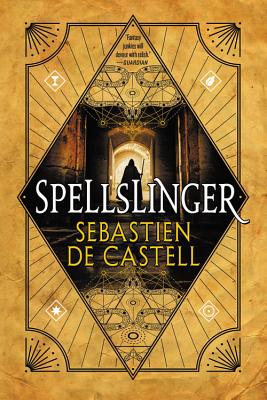 This is book number 1 in the Spellslinger series.

A would-be mage with no magic of his own has to defeat powerful enemies with only cunning and deception in the first book of an exciting adventure fantasy series from Sebastien de Castell.

Kellen is moments away from facing his first duel and proving his worth as a spellcaster. There's just one problem: his magic is fading.

Facing exile unless he can pass the mage trials, Kellen is willing to risk everything -- even his own life -- in search of a way to restore his magic. But when the enigmatic Ferius Parfax arrives in town, she challenges him to take a different path.

One of the elusive Argosi, Ferius is a traveller who lives by her wits and the cards she carries. Daring, unpredictable, and wielding magic Kellen has never seen before, she may be his only hope.

The first novel in a compelling six-book series, bursting with tricks, humor, and a whole new way to look at magic.

Spellslinger SeriesSpellslingerShadowblackCharmcaster
For more from Sebastien de Castell, check out:
The Greatcoats QuartetTraitor's BladeSaint's BloodKnight's ShadowTyrant's Throne
Sebastien de Castell is the author of the acclaimed swashbuckling fantasy series, The Greatcoats and the Carnegie Medal-nominated Spellslinger. His debut novel, Traitor's Blade, was shortlisted for both the Goodreads Choice Award for Best Fantasy and the Gemmell Morningstar Award, the Prix Imaginales for Best Foreign Work, and the John W. Campbell Award for Best New Writer. He spends his time writing, traveling, and going on adventures. Visit him at www.decastell.com.
"Told with the conviction of Ursula Le Guin and the dash of Alexandre Dumas"—New Statesman (UK)

"Spellslinger is the start of something truly special. Sebastien de Castell is a master of breakneck pacing, dagger-sharp dialogue, and twists you didn't see coming--and this series has it all."—Nicholas Eames, author of Kings of the Wyld

"A tremendously fun read full of wit and action."—James Islington, author of The Shadow of What Was Lost

"An intriguing system of magic, wry humor, and a twisting plot make for an entertaining series debut."—Kirkus

"This book is dangerously addictive. It has it all: compelling world-building, breathtaking plot-twists, a page-turning pace, and characters who soon feel like old friends. I can't wait for the next one!"—Melissa Caruso, author of The Tethered Mage

"Exotic, original and gripping from the get-go, Spellslinger is a must-read"—Jonathan Stroud, author of the Lockwood and Co series

"Written with such obvious joy and brio that it demands to be read."—RJ Barker, author of Age of Assassins

"A bucket-load of tension is offset with humour, power struggles, lots of magic and some great characters. Fantasy junkies will devour with relish."—Guardian (UK)

"There's room for wit and playfulness amid the high-stakes duels and death matches, and Kellen's career is likely to run and run."—The Observer (UK)

"We can confidently say that de Castell's new series has hit the ground running."—Starburst