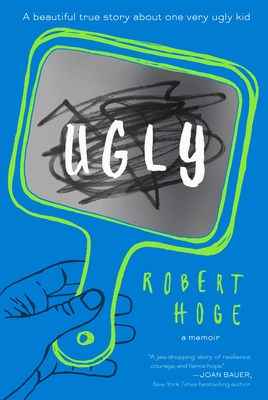 Robert Hoge wrote this story about his life.  He was born disfigured and speaks about his birth and childhood with complete honesty.  He has had a terrific career as a writer and journalist, but had to overcome challenges and negativity from others in order to do so.  This book will give the reader a look at what kids with special needs go through.  It gives an interesting look at Robert's family and his power to follow his heart and pursue his dreams.

— Sue M.
A funny, moving, and true story of an ordinary boy with an extraordinary face that's perfect for fans of Wonder—now available in the U.S.

When Robert Hoge was born, he had a tumor the size of a tennis ball in the middle of his face and short, twisted legs. Surgeons removed the tumor and made him a new nose from one of his toes.  Amazingly, he survived—with a face that would never be the same.

Strangers stared at him. Kids called him names, and adults could be cruel, too. Everybody seemed to agree that he was “ugly.” But Robert refused to let his face define him. He played pranks, got into trouble, had adventures with his big family, and finally found a sport that was perfect for him to play. And Robert came face to face with the biggest decision of his life, he followed his heart.

This poignant memoir about overcoming bullying and thriving with disabilities shows that what makes us “ugly” also makes us who we are. It features a reflective foil cover and black-and-white illustrations throughout.
Robert Hoge has done pretty much every kind of writing there is. He has worked as a journalist, a speechwriter, a science writer, and a political adviser. He's also written numerous short stories, articles, and interviews that have been published in Australia and overseas. When he's not writing, Robert enjoys photography and talking with people about looking different and being disabled. He lives in Brisbane, Australia, and is maried and has two amazing daughters.

Visit him at RobertHoge.com and follow him @RobertHoge.
PRAISE FOR Ugly:

"[This] coming-of-age story [is] unique and universal. [It] testifies to the power of a loving family and a courageous soul." --Starred Review, Publishers Weekly

"Eminently readable . . . a gripping readaloud, readalone, and discussion point all on its own." --Starred Review, BCCB

"Robert Hoge writes his exceptional life story in straightforward, compelling prose that forced me to question how I often I judge what I see around me. Bravo, Mr. Hoge! Please write more books." --Holly Goldberg Sloan, bestselling author of Counting By 7s

"Ugly made me think, it made me feel both joy and sadness, but most of all, it made me laugh. This is an honest, intelligent, and descriptive story of what it's like to grow up with a disability, including the good, the bad, and the . . . ugly." --Shane Burcaw, author of Laughing at My Nightmare