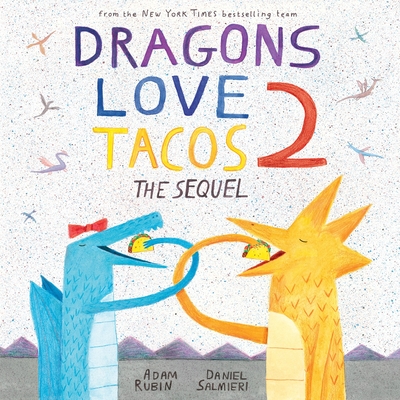 News alert! It has just been discovered that there are NO MORE TACOS left anywhere in the world. This is a huge problem because, as you know, dragons love tacos. If only there was a way for the dragons to travel back in time, to before tacos went extinct. Then they could grab lots of tacos and bring them back! It’s the perfect plan, as long as there’s no spicy salsa. You remember what happened last time . . .

The award-winning creators of Robo-Sauce and Secret Pizza Party return with a gut-bustingly hilarious companion to the bestselling phenomenon Dragons Love Tacos.
Adam Rubin is the New York Times bestselling author of a half dozen critically acclaimed picture books including Secret Pizza Party and Robo-Sauce. He spent ten years working as a creative director in the advertising industry before leaving his day job to write full-time. Adam has a keen interest in improv comedy, camping, and magic tricks. He Lives in Barcelona, Spain.

Daniel Salmieri is an artist, illustrator, and author from Brooklyn, NY. He has illustrated twelve picture books including the New York Times best seller, Dragons Love Tacos. Daniel is a regular contributor to several magazines and newspapers including The New Yorker and the New York Times, and works on a wide array of projects from packaging design to branding. He currently lives with his wife, son, and their dog Ronni in New York City.
"As Rubin puts it, 'dragons love diapers. I mean, tacos. Dragons love tacos. / Heck, everyone loves tacos.' Most young readers, even those in diapers, would agree." —Kirkus Reviews

"This zany companion promises to be as gut-bustingly ridiculous and yes-I'll-gladly-read-it-again-and-again entertaining as the first." — PopSugar