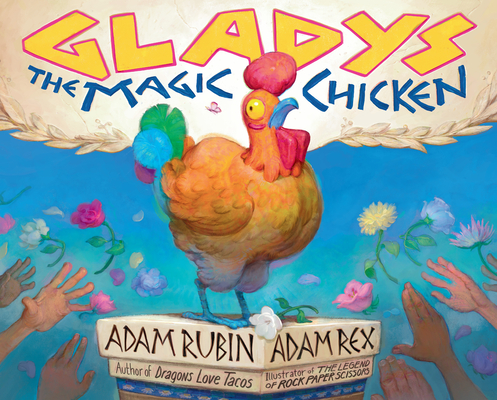 “A perfect combination of silly and profound. Is Gladys magic, or do the humans who believe in her make their own magic? Follow Gladys’s roundabout journey through a slightly less than historical version of ancient times and no matter what your age, you will believe, or just have a good time.”
— Anmiryam Budner, Main Point Books, Wayne, PA

From the mega-bestselling author of Dragons Love Tacos and the mega-bestselling illustrator of The Legend of Rock Paper Scissors, comes this hilarious new picture book about an irresistible chicken who unexpectedly finds herself on an epic journey during Ancient Times.

Gladys the chicken must be magic. After all, for everyone who encounters her, a wish is granted. The Shepherd Boy wishes to be beautiful, the Brave Swordsman wishes to join the Royal Guard, the Purple Pooh-bah wishes for his only daughter to be happy, and the Learned Princess wishes to escape the palace. And one by one, each of these wishes comes true. But . . . is Gladys really magic? Or is everyone making their own fortune? Either way, it adds up to one heck of an adventure for a chicken named Gladys. Blending a classic storybook feel with a thoroughly modern sense of humor, this side-splitting read aloud is perfect for anyone who wishes to see magic in the world—even if they are only looking at a chicken.
Adam Rubin is the #1 New York Times bestselling author of ten critically-acclaimed picture books, including Dragons Love Tacos, Dragons Love Tacos 2: The Sequel, High Five, Secret Pizza Party, Robo-Sauce, and El Chupacabras, which won the Texas Bluebonnet Award.

"Rubin and Rex fracture mythology left and right, with a performance-worthy, aside-heavy text and comically dramatic digital cartooning . . . Gladys’s feathered manifestation of that very human desire to “see magic in the world” is nothing to cluck at." —Publishers Weekly

"Sure to elicit more than a few laughs . . . The final lesson that there is magic in ordinary things (Gladys the chicken, in this case) is very sweet. Give this to the kid who has an obsession with Ancient Greece and Egypt to scratch the itch for an entertaining story set in a parody of those times. —The Bulletin of the Center for Children's Books