The Signature of All Things: A Novel (Hardcover) 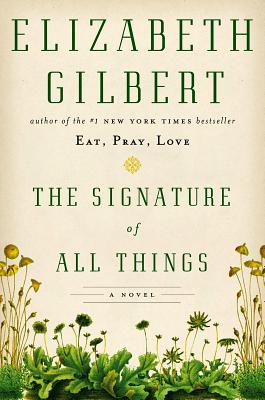 The Signature of All Things: A Novel (Hardcover)

“This novel spans two centuries and offers the reader details of travel, adventure, love, family dysfunction, and science. Alma Whitaker is born in 1800 to a self-made man who becomes the richest man in Philadelphia. Alma is brilliant but homely, and during her long, loveless life she pursues the study of botany, ultimately proposing one of the first theories of evolution. Gilbert expertly tracks Alma's travels around the world, her struggles with her family and the man with whom she falls in love, and her desperate need to understand the mechanisms behind all life.”
— Kate Mai, Blue Willow Bookshop, Houston, TX

From Elizabeth Gilbert, the author of national best-selling memoir “Eat, Pray, Love” comes the novel “The Signature of All Things.” “Signature” tells the story of American Alma Whittaker, daughter of a sensible Dutch mother and English thief-turned-botanical explorer. Alma grows up in one of the richest families in Philadelphia. Highly intelligent and passionate about plants herself, Alma becomes a son to her father, devoting her life to the family horticulture business. But meeting the ethereal and artistic Ambrose Pike changes everything. Alma finds herself traveling the world in attempt to understand the intersections of science, spirit and love. Gilbert is a wonderful writer and this is a terrific story. -Eileen Garvin, Waucoma Bookstore, Hood River, Oregon

— Eileen
A glorious, sweeping novel of desire, ambition, and the thirst for knowledge, from the # 1 New York Times bestselling author of Eat Pray Love, Big Magic, and City of Girls

In The Signature of All Things, Elizabeth Gilbert returns to fiction, inserting her inimitable voice into an enthralling story of love, adventure and discovery. Spanning much of the eighteenth and nineteenth centuries, the novel follows the fortunes of the extraordinary Whittaker family as led by the enterprising Henry Whittaker—a poor-born Englishman who makes a great fortune in the South American quinine trade, eventually becoming the richest man in Philadelphia. Born in 1800, Henry’s brilliant daughter, Alma (who inherits both her father’s money and his mind), ultimately becomes a botanist of considerable gifts herself. As Alma’s research takes her deeper into the mysteries of evolution, she falls in love with a man named Ambrose Pike who makes incomparable paintings of orchids and who draws her in the exact opposite direction—into the realm of the spiritual, the divine, and the magical. Alma is a clear-minded scientist; Ambrose a utopian artist—but what unites this unlikely couple is a desperate need to understand the workings of this world and the mechanisms behind all life.

Exquisitely researched and told at a galloping pace, The Signature of All Things soars across the globe—from London to Peru to Philadelphia to Tahiti to Amsterdam, and beyond. Along the way, the story is peopled with unforgettable characters: missionaries, abolitionists, adventurers, astronomers, sea captains, geniuses, and the quite mad. But most memorable of all, it is the story of Alma Whittaker, who—born in the Age of Enlightenment, but living well into the Industrial Revolution—bears witness to that extraordinary moment in human history when all the old assumptions about science, religion, commerce, and class were exploding into dangerous new ideas. Written in the bold, questing spirit of that singular time, Gilbert’s wise, deep, and spellbinding tale is certain to capture the hearts and minds of readers.

Elizabeth Gilbert is the #1 New York Times bestselling author of Big Magic, Eat Pray Love, and The Signature of All Things, as well as several other internationally bestselling books of fiction and nonfiction. She has been a finalist for the National Book Award, the National Book Critics Circle Award, and the PEN/Hemingway Award. Her latest novel, City of Girls, comes out in June, 2019.

"A rip-roaring tale... unlike anything Gilbert has ever written... Its prose has the elegant sheen of a nineteenth-century epic, but its concerns... are essentially modern." —The New York Times Magazine

"With this novel about a young, nineteenth-century Philadelphia woman who becomes a world-renowned botanist, Gilbert shows herself to be a writer at the height of her powers." —O, The Oprah Magazine, "Our Favorite Reads of the Year"

"The most ambitious and purely imaginative work in Gilbert's twenty-year career." —The Wall Street Journal

"Like Victor Hugo or Emile Zola, Gilbert captures something important about the wider world in The Signature of All Things: a pivotal moment in history when progress defined us in concrete ways." —The Washington Post

"A masterly tale of overflowing sensual and scientific enthusiasms in the nineteenth century." —Time, "Top Ten Fiction Books of the Year"

"Raucously ingenious... a novel of brave and lovely ideas... I found unshackled joy on every page." —The Chicago Tribune

"Alma's extraordinary life unspools like a Jane Austen novel... Here Gilbert claims her rightful spot as one of the twenty-first century's best American writers." —Outside

"Gilbert writes so wonderfully it's impossible not to swoon... Alma's drive for personal epiphany feels absolutely contemporary." —The Boston Globe

"A beautifully written, grandly expansive historical novel... Gilbert's writing is so smart and richly drawn that it does what all the best books do: it sweeps you up." —Entertainment Weekly

"Dazzling... a big-hearted, sweeping, unforgettable novel... If you don't think science or historical fiction can be bright, funny, and engaging, this novel will quickly prove you wrong." —The Miami Herald