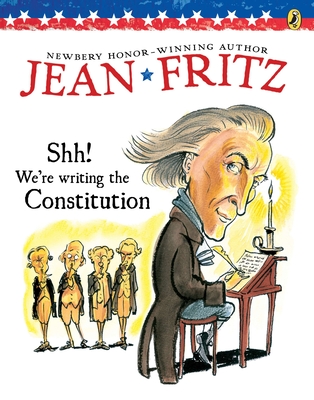 
Usually Ships in 1-5 Days
Go behind the scenes at the Constitutional Convention, thanks to award-winning author Jean Fritz's words!

This factual gem that's written with Newbery Honor author Jean Fritz's humorous touch chronicles the hot summer of 1787 where fifty-five delegates from thirteen states huddled together in the strictest secrecy in Philadelphia to draw up the constitution of the United States!

Includes a copy of the Constitution and those who signed it!

"An informative, interesting, and immensely readable account of the Constitutional Convention of 1787 . . . An excellent choice for introducing young readers to the complexities of the constitution."—School Library Journal
Acclaimed biographer, Jean Fritz, was born in China to American missionaries on November 16, 1915. Living there until she was almost thirteen sparked a lifelong interest in American history.  She wrote about her childhood in China in Homesick, My Own Story, a Newbery Honor Book and winner of the National Book Award.
Ms. Fritz was the author of forty-five books for children and young people. Many center on historical American figures, gaining her a reputation as the premier author of biographies for children and young people.
Among the other prestigious awards Ms. Fritz has garnered are: the National Humanities Medal, the Children's Literature Legacy Award, the May Hill Arbuthnot Lecture Award. the Christopher Award, the Boston Globe-Horn Book Non-Fiction Award, a New York Times Notable Book of the Year, and many ALA Notable Books of the Year, School Library Journal Best Books of the Year, and ALA Booklist Editors’ Choice Awards.
She passed away on May 14, 2017.
Praise for Shh! We're Writing the Constitution

★"As usual, Fritz's account is lively and spiced with bits of detail that make the report come alive .... The informed reporting that goes on here will give readers a new perspective on our government's beginnings." -Booklist (starred review)

★"The author has distinguished herself again by making a landmark event an exciting story." -The Bulletin of the Center for Children's Books (starred review)

"An informative, interesting, and immensely readable account of the Constitutional Convention of 1787 . . . An excellent choice for introducing young readers to the complexities of the constitution."—School Library Journal

"In her conversational and entertaining style, Fritz takes readers behind the scenes to learn what it was like during the Constitutional Convention of 1787 . . . A really delightful way to learn American history."—Children's Literature