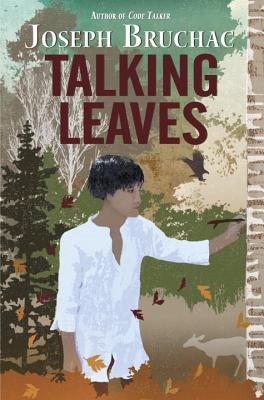 This book is about Sequoyah, a Cherokee who helped his people learn to read and write their own language.  His son and others are unfamiliar with written language and think he might be doing witchcraft.  This is a great read that teaches children about the Cherokee culture.

— Sue M.
A new work of historical fiction about Sequoyah and the creation of the Cherokee alphabet, from the acclaimed author of Code Talker

Thirteen-year-old Uwohali has not seen his father, Sequoyah, for many years. So when Sequoyah returns to the village, Uwohali is eager to reconnect. But Sequoyah’s new obsession with making strange markings causes friends and neighbors in their tribe to wonder whether he is crazy, or worse—practicing witchcraft. What they don’t know, and what Uwohali discovers, is that Sequoyah is a genius and his strange markings are actually an alphabet representing the sounds of the Cherokee language.
The story of one of the most important figures in Native American history is brought to life for middle grade readers.
Joseph Bruchac is a highly acclaimed children’s book author, poet, novelist, and storyteller, as well as a scholar of Native American culture. His work has appeared in hundreds of publications, from Akwesasne Notes and American Poetry Review to National Geographic and Parabola. He has authored many books for adults and children, including Code Talker: A Novel About the Navajo Marines of World War Two, Skeleton Man, and The Heart of a Chief.
*"A tale of depth and universal humanity...This is a strong middle grade novel that offers a needed perspective on Cherokee history and the life of a key historical figure." — School Library Journal,starred review

"Themes of preserving identity and culture through both spoken and written language will appeal to readers of all ages.A vivid retelling of a pivotal time for the Cherokee nation." — Kirkus Reviews

"Although the particulars of the novel occur two hundred years ago, the universalityof fitting into a blended family and looking for love and acceptance from aonce-absent father feel strikingly contemporary." — The Horn Book

"This is as much a story about fathers and sons as it is about the legendary Sequoyah’s hugely significant work, and it offers multiple points of access for history buffs or fans of family dramas." — BCCB