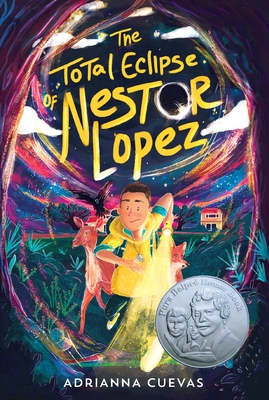 In this magical middle-grade debut novel from Adrianna Cuevas, The Total Eclipse of Nestor Lopez, a Cuban American boy must use his secret ability to communicate with animals to save the inhabitants of his town when they are threatened by a tule vieja, a witch that transforms into animals.

All Nestor Lopez wants is to live in one place for more than a few months and have dinner with his dad.

When he and his mother move to a new town to live with his grandmother after his dad’s latest deployment, Nestor plans to lay low. He definitely doesn’t want to anyone find out his deepest secret: that he can talk to animals.

But when the animals in his new town start disappearing, Nestor's grandmother becomes the prime suspect after she is spotted in the woods where they were last seen. As Nestor investigates the source of the disappearances, he learns that they are being seized by a tule vieja—a witch who can absorb an animal’s powers by biting it during a solar eclipse. And the next eclipse is just around the corner…

Now it’s up to Nestor’s extraordinary ability and his new friends to catch the tule vieja—and save a place he might just call home.

Adrianna Cuevas is the author of The Total Eclipse of Nestor Lopez (FSG BYR, 2020) and Cuba in My Pocket (FSG BYR, 2021). She is a first-generation Cuban-American originally from Miami, Florida. After teaching Spanish and ESOL for sixteen years, she decided to pursue her passion for storytelling. Adrianna currently resides outside of Austin, TX with her husband and son where they enjoy hiking, traveling, and cooking lots of Cuban food.

"Readers will devour this fast-paced adventure as they root for Nestor and his ragtag bunch of friends and animal allies . . . In a unique take on South and Central American folklore, Cuevas brings to life an earthly type of twisted magic that transcends spells and transfiguration, extending into the feelings of belonging and finding a true home." —Booklist

"Cuevas crafts a riveting story based on folktales from Panama and Costa Rica." —School Library Journal