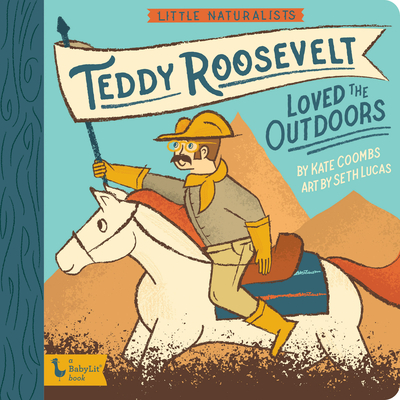 Introduce your brilliant baby to the conservationist and noted outdoorsman President Theodore Roosevelt.

Theodore "Teddy" Roosevelt suffered from severe asthma as a child, but he was determined to become stronger. He loved going on adventures and loved the outdoors. As president, he went camping in the wilds of Yosemite with John Muir, which strengthened his desire to preserve our nation's most beautiful spaces. In his lifetime, Roosevelt designated national parks and established national monuments, national forests, bird reserves, and national game reserves, along with the US Forest Service. Kate Coombs' engaging narrative and Seth Lucas' captivating art teach young readers about this inspiring conservationist and former president, encouraging little naturalists to Be Kind and Be Adventurous.

Kate Coombs is an award-winning author of original fairy tales, poems, middle-grade fantasy novels, and picture books, including the critically acclaimed Water Sings Blue, which won the Lee Bennett Hopkins Poetry Award for 2012, and many books in the bestselling BabyLit series. She lives in Bountiful, Utah.Seth Lucas is an illustrator and designer with a BFA in graphic design. He is the co-creator of Ello There Outdoors selling prints and accessories supporting the National Parks and outdoors. He lives in Boise, ID, with his wife and daughter.