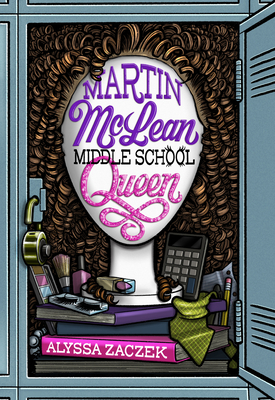 
On Our Shelves Now
In this bighearted middle-grade debut, Martin McLean has to figure out how to find his voice as he navigates friendship, family, first crushes--and an unexpected amount of glitter. Martin McLean has always been surrounded by people who can express themselves, but he's not great at speaking up unless he's at a Mathletes competition. Then his T o Billy introduces him to the world of drag, inspiring Martin to create a fabulous drag queen alter ego. When Martin discovers that his first-ever drag show is the same night as an important Mathletes tournament, he realizes that he can only pull off both appearances by revealing his true self to his friends--and channeling his inner drag superstar.

Alyssa Zaczek is an author, playwright, journalist, and a lifelong lover of words. Martin McLean, Middle School Queen is her debut novel. Originally from Chicago, Alyssa now lives in St. Cloud, MN. Visit her online at alyssazaczek.com and on Twitter @AlyssaDZaczek.