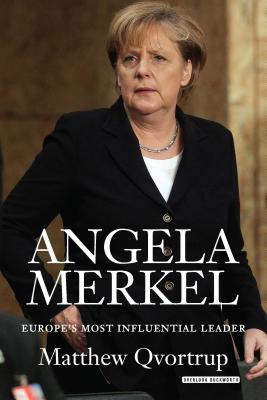 How quick we are to judge politicians based on what we see or read in the media which, in fact, may be somewhat skewed.  This book is filled with surprising facts abut Merkel herself, and many other world leaders.  As the author moves us through Merkel's life we learn about various crises and how the resolution was obtained.  This is a fascinating book.  What is most amazing is how the author managed to compile so many facts about so many world leaders into this book.  I highly recommend this book.

— Dianne
This is the fascinating tale of Angela Merkel’s political ascent, in which she outmaneuvered her male colleagues and made Germany the strongest economy in Europe. With the storytelling gifts of a novelist, as well as nuanced political expertise garnered from over a decade of experience as an academic and journalist, Matt Qvortrup gives readers unprecedented, personal insight into Frau Merkel’s upbringing under communism, describing how the Secret Police tried to recruit her as a spy, how she lived as a squatter in Berlin, and how she went from distributing leaflets to sitting at the Cabinet table in Helmut Kohl’s government in less than a year. This is the story—told for the first time in English—of how Merkel and her staff of mostly female advisors repeatedly outsmarted the old boys network of conservative male politicians in Germany, turning her country into a more liberal and more prosperous place.  Angela Merkel: Europe's Most Influential Leader combines the narrative of Merkel’s life with a vivid account of German history from 1945 to the present day, featuring cameo appearances by Willy Brandt, Konrad Adenauer, and Helmut Kohl. At a time when Merkel is the chief representative of the west in the negotiations with Putin over the Ukraine, she is also the woman who holds the keys to British membership of the EU. Anyone interested in our time, in the politics of today, should read this lively account of the woman with a doctorate in quantum physics who has become the undisputed queen of Europe.
Matt Qvortrup is currently professor of political science at Coventry University s Centre for Trust, Peace and Social Relations. Previously, he was academic director in the Department of Security and Management at Cranfield University. He was educated at Oxford and the University of Copenhagen and has written for Bloomberg Businessweek, The Sun, The Scotsman, and The Times. He also appears as a regular commentator for the BBC, on both radio and television."