Equality's Call: The Story of Voting Rights in America (Hardcover) 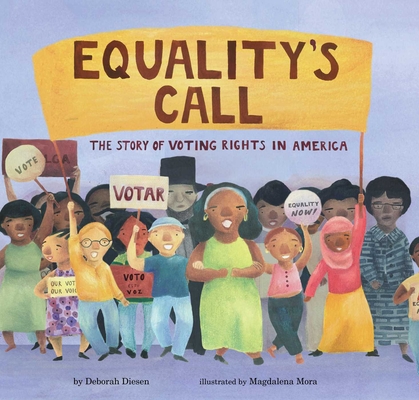 Equality's Call: The Story of Voting Rights in America (Hardcover)


Usually Ships in 1-5 Days
Learn all about the history of voting rights in the United States—from our nation’s founding to the present day—in this powerful picture book from the New York Times bestselling author of The Pout-Pout Fish.

A right isn’t right
till it’s granted to all…

The founders of the United States declared that consent of the governed was a key part of their plan for the new nation. But for many years, only white men of means were allowed to vote. This unflinching and inspiring history of voting rights looks back at the activists who answered equality’s call, working tirelessly to secure the right for all to vote, and it also looks forward to the future and the work that still needs to be done.
Deborah Diesen is the author of many children’s picture books, including the New York Times bestselling The Pout-Pout Fish and Equality’s Call. She loves playing with words and rhymes and rhythms. She has worked as a bookseller, a bookkeeper, and a reference librarian. She and her family live in Michigan.

Magdalena Mora is a Minneapolis-based illustrator and graphic designer with a special interest in children’s books and visual storytelling. When she isn’t drawing, she spends her free time reading, people-gawking, and trying to find the best tacos in the Twin Cities. Equality’s Call by Deborah Diesen is her first picture book.