The Runaway Pea Washed Away (Hardcover) 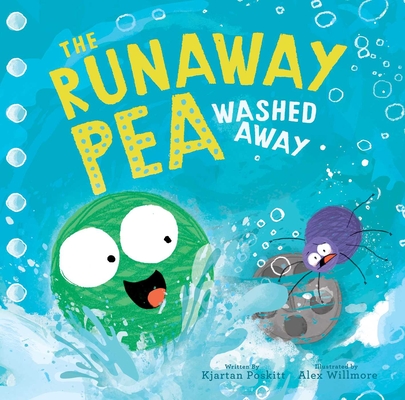 The Runaway Pea Washed Away (Hardcover)


On Our Shelves Now
This silly and quirky kitchen escape about a rebellious pea’s trip down the drain shows what can happen when you take your eyes off your food—perfect for fans of Sue Hendra, Paul Linnet, and Jory John!

The Runaway Pea is off the plate again…and this time he’s bounced right down the drain! It’s cold and dark, but he’s not the type who gets grum-pea. Instead, the Runaway Pea is having an amazing time splashing and sliding toward the sewer and making new acquaintances along the way! But are Duck, Fish, and Frog looking for a new friend? Or for a little green snack?
Kjartan Poskitt’s books have been translated into thirty languages and include the Murderous Maths series, as well as books on space, puzzles, and magic. He has also written funny children’s fiction including Urgum the Axeman, Borgon the Axeboy and the Whispering Temple, the award-winning Agatha Parrot series, and The Runaway Pea.

Alex Willmore is an illustrator/designer whose passion lies in character design. Born in Northampton, England, Alex has been drawing characters since the moment he first picked up a pencil. A love of animals and picture books have inspired him and led to a career in illustration. Alex has been twice nominated for the Sheffield Children’s Book Award, was long-listed for the Kate Greenaway Medal 2020, and is currently nominated for The Federation of Children’s Book Groups Children’s Book Award 2020.
In his second outing, the Runaway Pea gets swept away on an aqueous adventure.

British funnyman and children’s TV show presenter Poskitt returns with another rollicking escapade for the lively and likable legume. Mealtime is over, the dishes have been washed, and now a lonely pea floats in sudsy water in the kitchen sink. When the plug is pulled, he finds himself sucked down the drain, yet he’s anything but scared. This pea is up for a thrill. Drifting along in the water, he meets a vexed little spider in need of dry land, so he offers himself as a flotation device. They whoosh through underground pipes and shoot out into a small river, where they meet a duck and a fish. The happy-go-lucky pea is eager to befriend them, but the spider is wary, and a good thing too, since he saves the pea from the river creatures’ sinister designs. Finally, with the help of a frog, they hit dry land. The spider hurries away forthwith, and for the first time the pea feels “helpless and lost and alone.” Thankfully, Boris the dog comes by for a drink, and the pea manages to get back home by hitching a ride on the dog’s tail...but the adventure isn’t over yet. The rhyming text is fun to read aloud, and the action is snappy. Willmore’s spirited illustrations just add to the fun. Even pea haters will enjoy this amusing caper. Hopefully, adventure No. 3 (already out in the U.K.) will arrive on our shores soon. (This book was reviewed digitally.)