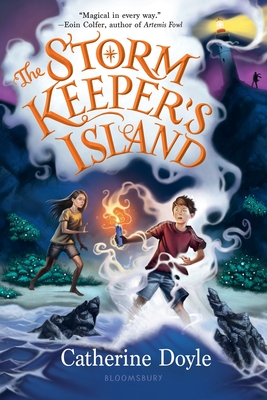 This is book number 1 in the The Storm Keeper’s Island Series series.

"Magical in every way." - Eoin Colfer, author of Artemis Fowl

“Fans of Harry Potter or Percy Jackson can add Fionn Boyle as a generous and brave hero from the Emerald Isle.” – School Library Connection

Fionn Boyle comes from a long line of brave seafarers, people with the ocean behind their eyes. But he can't help but fear the open sea. For years, Fionn's mother has told him stories of Arranmore Island, a strange place that seems to haunt her. Fionn has always wondered about this mysterious island, and from the day he arrives he starts noticing things that can't be explained. He can sense the island all around him, and it feels like the island is watching him, too.

Once in a generation, Arranmore Island chooses a new Storm Keeper to wield its power and keep its magic safe from enemies. The time has come for his grandfather, a secretive and eccentric old man, to step down. But as Fionn and the other descendants of Arranmore's most powerful families fight to become the island's next champion, a more sinister magic is waking up, intent on rekindling a long-ago war and changing Fionn's life and the island's future forever.

Catherine Doyle grew up beside the Atlantic Ocean in the west of Ireland. Her love of reading began with great Irish myths and legends, and fostered in her an ambition to one day write her own. She holds a first class BA in Psychology and a first class MA in Publishing from the National University of Ireland, Galway, and is the author of the YA Blood for Blood trilogy. The Storm Keeper's Island is her debut middle-grade novel and was inspired by her real-life ancestral home of Arranmore Island, where her grandparents grew up, and the adventures of her many seafaring ancestors. After living in Dublin City for two years, Catherine is now based in Galway but spends a lot of her time in London and the US.

“Doyle's writing glows, with the pitch-perfect barbs the young people sling at each other, the atmospheric weather events, her masterfully delineated characters - including the island itself - and a page-turning plot. Heart-wrenching and heart-stopping, this is one gorgeous novel.” —New York Times Book Review

“Doyle's prose explodes with lyrical language as she deftly explores themes of loss, guilt, and how memory weighs on one's soul. . . . Doyle proves with this exquisite debut that she is a middle-grade fiction author to watch, and readers can look forward to the continuing adventures of the Storm Keeper.” —Booklist, starred review

“Doyle infuses every aspect of the novel with the richness of Irish folklore and culture: readers will be captivated by descriptions of the Island's beauty and magical history . . . [a] modern yet timeless fantasy.” —School Library Journal, starred review

“Fans of Harry Potter or Percy Jackson can add Fionn Boyle as a generous and brave hero from the Emerald Isle.” —School Library Connection, starred review

“The engaging construction of magical time travel and Doyle's beautifully descriptive prose will enchant those looking for an atmospheric magical adventure.” —BCCB

“Irish legends collide with modern times in a fast-paced, magical tale about the ordinary becoming extraordinary. . . . A distinctive fantasy with depth, humor, and heart.” —Kirkus Reviews

“Doyle's vivid imagery and colorful language engages the senses as she weaves together an atmospheric setting . . . a beautiful blend of Irish legend and self-discovery.” —Shelf Awareness

“Imaginative and exhilarating.” —Rebecca Stead, Newbery Award-winning author of When You Reach Me

“Catherine Doyle is one to watch.” —Lauren Wolk, Newbery Honor author of Wolf Hollow and Beyond the Bright Sea