My Family Is Special (Hardcover) 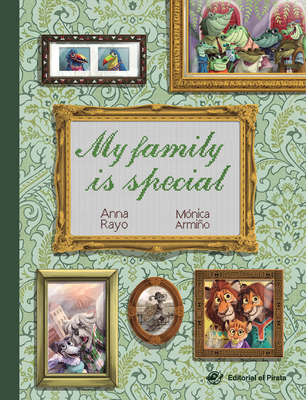 My Family Is Special (Hardcover)


Usually Ships in 1-5 Days
My Family Is Special is a book for children aged from 2 to 5 years that tells us about family diversity. Spectacular illustrations that lead us into a story starring many animals, with a hundred-year-old tortoise that invites her friends to her birthday party. Her friends end up being different types of families: a traditional family, a large family, a single parent family, a blended family, a homoparental family, a divorced family, a family without children and an adoptive family. At the end of the book, they discover that, all together, they form what the hundred-year-old tortoise considers to be her family. In addition, you can play a game to find a letter and envelope in each one of the illustrations. Will you be able to find them? The text is written in upper case, which is ideal for children from the age of 5 years to start learning to read.
Mónica Armiño was born in Madrid in 1983. She studied at Art School 10 and later graduated in Fine Arts from the Complutense University. In addition to children’s and young people’s illustrations, a field in which she has spent several years publishing books both nationally and internationally, she also works as a character designer and visual artist on films and animated series, for well-known studios including Cartoon Saloon, Zinkia, The Thinklab or Lighthouse Studio. Anna Rayo is a pseudonym.